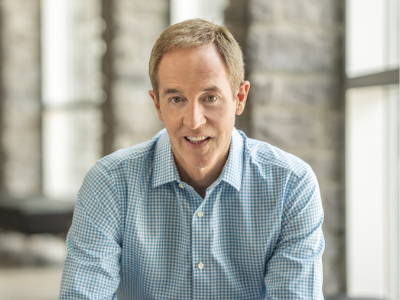 Communicator, author, and pastor Andy Stanley founded Atlanta-based North Point Ministries in 1995. Today, NPM consists of six churches in the Atlanta area and a network of more than 90 churches around the globe that collectively serve nearly 185,000 people weekly. As host of Your Move with Andy Stanley, which delivers over seven million messages each month through television and podcasts, and author of more than 20 books. He is considered one of the most influential pastors in America. Andy and his wife, Sandra, have three grown children and live near Atlanta.

Better Decisions, Fewer Regrets
5 Questions to Help You Determine Your Next Move

Life is all about decision-making. Every day. Multiple times a day. Sometimes we’re sure. Sometimes we’re unsure. But in the end, we are where we are because of decisions we’ve made. Your decisions, along with your responses to other people’s decisions, which are also your decisions, are about the only thing you can control in life, which means your decisions are how you control your life. Decisions are your steering wheel. Your joystick. Your keypad. Which means: Your decisions determine your story. The good news is that you get to decide. But you decide one decision at a time because you write the story of your life. One decision at a time.

Irresistible
Reclaiming the New That Jesus Unleashed for the World

Once upon a time there was a version of our faith that was practically . . . irresistible.But that was then. Today we preach, teach, write, and communicate as if nothing has changed. As if “The Bible says it” still settles it. What did they know that we don’t?

Ever wonder what it would be like to have guardrails in other areas of your life—areas where culture baits you to the edge of disaster and then chastises you when you step across the line? Your friendships. Your finances. Your marriage. Maybe your greatest regret could have been avoided if you had established guardrails. Andy Stanley challenges us to stop flirting with disaster and establish some personal guardrails.

What Makes You Happy
It's Not What You'd Expect

Everybody wants to be happy. Everybody is on a happiness quest. For many, happiness is measured in moments. Experiences. It's elusive. Unsustainable. What about you? What makes you happy? Something comes to mind for each of us. Pastor Andy Stanley examines the ways in which we tend to define happiness and explains how that definition influences the way we pursue it. He reveals that happiness is about who, not what, and that happy people are at peace with God, with others, and with themselves.

Why in the World
The Reason God Became One of Us

Pastor Andy Stanley takes a closer look at one of the unique things Christians believe: God became one of us. Why in the world would God do that? Why would God leave the comfort and recognition of heaven to live on this ball of dirt in a time before morphine and indoor plumbing when the best of conditions barely paralleled the worst of modern-day conditions? Why?We think we know why He died. But what compelled him to live as one of us?

Christian
It's Not What You Think

Join pastor and bestselling Andy Stanley as he examines the characteristics Jesus used to define those who follow him and the implications they have for believers today. What does is mean to be Christian? Curiously, the term is never used in Scripture. Instead, Christian was a label used by outsiders to define Jesus’ followers. Jesus referenced ‘disciple’ as the key word he used to describe his supporters along with the fact that they would be known for their love. Would the non-believing world put aside its definition of ‘Christian’ and instead know us by our love?

Community. It's a word we often hear, but what does it really mean? And why is it so important to your spiritual life? Because you can’t grow spiritually unless you’re connected relationally. God designed us that way. He wants to use other people to grow us and he wants to use us to grow other people. This study is a great way for small groups to launch and grow together and for churches to connect new people in their congregation.

Starting Point
A Conversation About Faith

Everything has a starting point—your life, your relationships, your education, your career. Sometimes we forget that faith has a starting point as well. Welcome to Starting Point – an 8-session small group conversation about faith. Whether you’re new to faith, curious about God, or coming back to church after some time away, it’s a place where your opinions and beliefs are valued, and no question is off limits.